This World AIDS Day, Europe could turn the tide 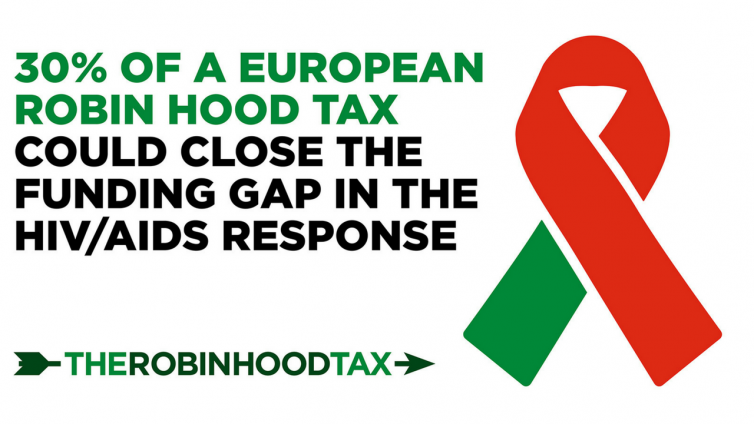 This World AIDS Day, Europe could turn the tide
Robin Hood
International
Tweet
Maria Encinas is Advocacy Manager at Spanish-based campaigning organisation Salud Por Derecho (Right to Health). As well as fighting for a Robin Hood Tax, Salud Por Derecho defends human rights so that all people, wherever they live, can exercise the right to health, ensuring universal access to HIV/AIDS treatment, prevention and care.

This World AIDS Day, I’m writing to you about how Europe’s leaders could help a Robin Hood Tax close the funding gap to fight HIV/AIDS.

This week, Salud Por Derecho joined HIV organisations across the continent to launch a new report (The European Financial Transaction Tax: A way to end AIDS) that outlines how this can be done. AIDS, tuberculosis (TB) and malaria continue to pose a huge burden on global health and require commitment and immediate action. According to the world's largest health agencies, HIV infects 6000 people every day, with 2 million new cases every year.

However, it is possible to see the end of these pandemics by 2030: but only with better policies and funding. Organizations such as the Global Fund for AIDS, tuberculosis and malaria (GFATM) are essential to securing the money from different sources to finance the response to the pandemics. But right now, there isn’t enough money: some predictions put the shortfall in funding the global fight against AIDS at £7bn per year.

And in order to achieve a turn of the tide on HIV within the next fifteen years, we knew it would be crucial to find new ways to get these much-needed funds. This is why, since 2013, we at Salud Por Derecho have coordinated the Spanish Robin Hood Tax campaign.

We believe that it is highly important to allow governments to not only establish control within financial markets, and to discourage the most speculative transactions; but also to collect revenues that could prove vital in transforming the lives of the world’s poorest people: especially when 95% of people living with HIV are from developing countries.

It is estimated that up to €25bn in revenue could be collected in the ten European countries where the tax will be applied: a game-changing amount. And we know that only 30% of the European Robin Hood Tax revenues could close the gap in the HIV/AIDS response.

So we know what we need (funding). And we know how to get it (a Robin Hood Tax). Let’s do this!

Tell your friends and family what Robin could do

Previous : Want to really help the ‘Jams’? Time for a Robin Hood Tax
Next : It's official